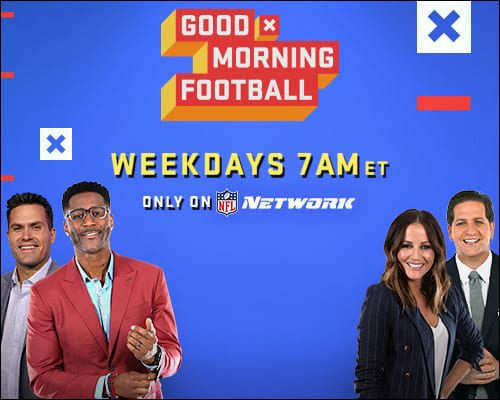 On a normal day, four people sit at an officious, NFL-crested wooden desk and they go into the news from the morning and day before, then they provide in-depth analysis and behind-the-scenes live reporting. This is far from an outrageous concept, but Good Morning Football on the NFL Network has presented an outrageously excellent program over the past year – Not just a great football or cable show, but an overall excellent show that is surprisingly as good as almost any other morning show. Four personalities – Kay Adams, Kyle Brandt, Nate Burleson, and Peter Schrager – lead the daily show on weekdays, and while they were far from star personalities or household names before, they feel like they could be our family members every time we watch on the television screen. Good Morning Football has cemented itself as a successful part of the daytime sports realm as it closes its third full season. [1]

Good Morning Football Is One of Television’s Best Shows

Good Morning Football (Abbreviated as GMFB) obviously benefits from airing during the NFL season and being on a football-only cable network. Yet this summer it raised its rating about 40 percent and was easily defeating the much larger ESPN’s new morning show Get Up – then led by three of their top hosts in Mike Greenberg, Michelle Beadle, and Jalen Rose – before this season even began.[12]

A big difference in comparison to previous NFL Network morning shows (NFL:AMand NFL HQ) is that the presentation is produced almost entirely outside the company. Sony Television’s CEO/Executive Producer Michael Davies (more known for shows Wife Swap and Who Wants to be a Millionaire?) manages production at the show’s recently opened SNY Manhattan complex[2]. Three of four hosts – Adams, Burleson, and Shrager – maintain on-air roles at other media outlets. Consider that for a moment: contracting three hours of your network’s daily schedule to a panel of mostly non-company producers and asking them to manage a panel of mostly competing channel’s employees, across the country from your headquarters in Los Angeles is a very risky decision. The early months were not exactly stellar for the show, as they admitted to Sports Illustrated in August. But as the show aged, the hosts became more comfortable with each other, gaining experience and recognition, and they took off for a sprint and haven’t slowed down.[3]

GMFB is versatile in its NFL coverage. It has to be, considering how complex and layered the subjects become when discussing league topics. They can have plenty of fun as often as possible – whether they’re ranking Peppa Pig episodes[4], comparing Tom Hanks and Leonardo DiCaprio[5], discussing the legacy of Marc Summers (which prompted the Nickelodeon personality’s response on Twitter)[6]or keeping or shredding hot takes in an ever-adapting office shredder (for example, one episode it had it themed as the “Weddler” for Ravens safety Eric Weddle)[7] – but when they have to report on dramatic or momentous stories, such as “Black Monday”[8], which this year left only four minorities in management level positions across the league, they can. In fact, because the show is popular around the league, GMFB sets the tone for how NFL coverage looks for the rest of the day or, in the case of “Black Monday”, the coming weeks.

Really, almost none of what the show does is really revolutionary. But this is their formula for a successful morning show: radiating positivity to all, any and every day, without constantly hating on anybody but being honest and fair when necessary. There is free-range analysis and discussions that provides more than mainstream takes. GMFB not only references non-sports events and topics often, but they also make it a point to do it as often as possible[9], such as once analyzing film of Brandt’s “Today” show appearance where he shared fitness tips, down to wardrobe judgements.

As Adams told ThePostGame.com in a September interview, “when we bring in an injection of pop culture…when you combine real things, when you also mess up…that’s when you resonate because you become relatable, and…we’re all relatable. I don’t think anyone on television should be looked at any other way.”[10] Frequent interviews with sports personalities like Mike Francesa and Chad Johnson but also with non-sports subjects such as Bono of U2 and Imagine Dragons support that. GMFB is the favorite of several current and past faces of the football realm, and many media members and celebrities who provide testimonials that reflect the show’s firepower.

Morning television, sports or otherwise, has recently travelled a bumpy road. As of the end of the 2017-18 television year, ABC, CBS, and NBC’s morning shows all lost between 5-9 percent of their audiences from the year before[11], continuing a trend of general decline in TV in general. On cable, where MSNBC and Fox News also struggle for the top spots[14] – for the most part, regular viewers are the only one tuning in to these programs, and less and less of them are even doing that. Even sports media giant ESPN has struggled mightily in recent years where they normally succeed, causing them to cut ties with controversial employees, drop several panned and fiscally-draining ventures, and firing or restructuring a third of the company to make up for the dollar signs dipping so far into the red[13].

The NFL Network is not completely perfect, but the channel began to find itself by producing positive, free-ranged shows like Good Morning Football. Fueled by journalism gems, dance moves, and unexpected analogy (like the Steelers to the Kardashians), GMFB spreads optimism to its growing base, and its viewers and the network alike are benefitting from the contrast the show provides to its competition. Don’t dismiss the show because of its focus; its magic is much more than football. The network’s culture and reputation has changed for the better, along with the NFL’s slow and steady growth, and it can largely be cited as setting the tone for sports news and culture for the rest of the day and beyond. Now, the question is, will others try to follow in its footsteps?